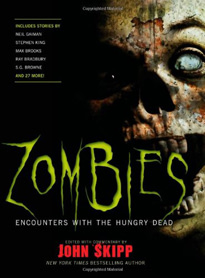 In the tradition of Black Dog & Leventhal’s bestselling

Vampires and Ghosts, this anthology of 32 stories is set in a world where the dead have risen from the grave to consume the living. This rich collection showcases the best of the genre—from short-story masters such as Stephen King, Neil Gaiman, Ray Bradbury, and Poppy Z. Brite; zombie stalwarts such as David J. Schow and Jack Ketchum; “bizarro” founders such as Carlton Mellick III; and popular up-and-comers such as Max Brooks and S.G. Browne—and will satisfy the insatiable hunger of zombie fans everywhere.

A series of captivating essays about zombies in folklore and in popular culture by John Skipp, award-winning zombie anthologist and author, enrich an already extraordinary collection by discussing the past, present, and future of the living dead. And a resources section encompassing the best of long-form fiction, movies, websites, games is included for any reader interested in learning more about the wider world of the undead.

Lazarus by Leonid Andreyev
Dead Men Working in the Cane Fields by William Seabrook
The Return of Timmy Baterman (from Pet Sematery) by Stephen King
The Emissary by Ray Bradbury
A Case of the Stubborns by Robert Bloch
It by Theodore Sturgeon
Lie Still Sleep Becalmed by Steve Duffy
Bitter Grounds by Neal Gaiman
Sea Oak by George Saunders
The Late Shift by Dennis Etchison
A Zombie’s Lament by S.G. Brown
Best Served Cold by Justine Musk
The Dead Gather on the Bridge to Seattle by Adam Golaski
The Quarantine Act by Mehitobel Wilson
The Good Parts by Les Daniels
Bodies and Heads by Steve Rasnic Tem
On the Far Side of the Cadillac Desert with Dead Folks by Joe Lansdale
Like Pavlov’s Dogs by Steven Boyett
Jerry’s Kids Meet Wormboy by David Schow
Eat Me by Robert McCammon
The Visitor by Jack Ketchum
The Prince of Nox by Kathe Koja
Call Me Doctor by Eric Shapiro
The Great Wall by Max Brooks
Calcutta Lord of Nerves by Poppy Z. Brite
God Save the Queen by John Skipp and Marc Levinthal
We Will Rebuild by Cody Goodfellow
Sparks Fly Upward by Lisa Morton
Lemon Knives N Cockroaches by Carlton Mellick III
Zaambi by Terry and Christopher Morgan
The Zombies of Madison County by Douglas Winter
Dead Like Me by Adam Troy-Castro